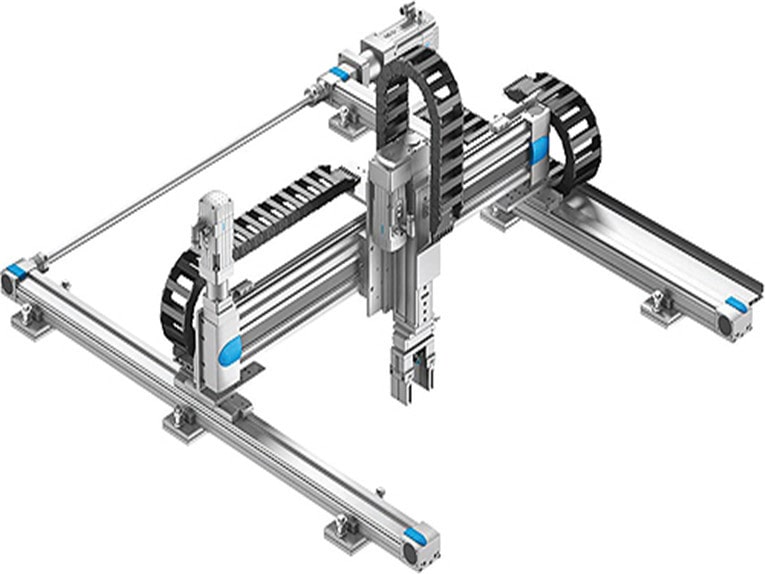 Cartesian handling systems as serial kinematics have main axes for straight-line motion and auxiliary axes for rotation. The system acts simultaneously as guide, support and drive and must be integrated into the application’s complete system regardless of the handling system structure.

All Cartesian handling systems can be installed in any position in the space. This allows the mechanical system to be adapted ideally to the conditions of the application. Here is a look at some of the more common designs.

A 2D cantilever consists of a horizontal axis (Y) with a vertical drive (Z) mounted on the front of it.

A linear gantry is a horizontal axis (Y) secured at both ends, left and right. A vertical axis (Z) is mounted on a slide between the two end points of the axis. Linear gantries are usually slim, with a rectangular vertical working space.

In addition to the conventional configuration with individual axes, linear gantries and planar surface gantries also take the form of complete systems with a fixed mechanical combination with a rotating toothed-belt as the driving component. The low effective load makes them suitable for high capacities (picks/min) with corresponding dynamic response.

Three-dimensional – These Cartesian handling systems are divided into the categories of cantilevers and 3D gantries with movements on both planes.

3D cantilevers are two axes (X) mounted in parallel plus a cantilever axis (Y) perpendicular to the direction of movement, with a vertical axis (Z) mounted on the front of it.

3D gantries consist of two parallel axes (X) linked by an axis (Y) perpendicular to the direction of movement. A vertical axis (Z) is mounted on this perpendicular axis.

Note: With planar surface, linear and 3D gantries, the force is applied between the two points of support of the horizontal axes. The horizontal axis on the cantilever acts as a lever due to the load suspended on its end.

The degree of programming required depends on the function: If the system only needs to move to individual points, quick and simple PLC programming is sufficient.

With conventional robots, complex programming is often required. Consequently, a great deal of work is needed to use 4- to 6-axes systems for mechanical tasks. For example, all 6 axes always need to be moved at the same time for straight-line travel. It is also difficult and time-consuming to program “right arm to left arm” in conventional robotic applications. Cartesian handling systems offer excellent alternatives here.

The foundations for energy efficient handling are laid even when selecting the system. If the application requires long dwell times in certain positions, all axes on conventional robots are subject to closed-loop control and must continuously compensate for weight force.

With Cartesian handling systems, it is usually only the vertical Z axis which needs to apply force continuously. This force is required to hold the effective load in the desired position against gravitational force. This can be achieved very efficiently using pneumatic drives, as these do not consume energy in their holding phases. A further advantage of pneumatic Z axes is their low dead weight, which means that smaller sizes can be used for the mechanical components of X and Y axes and their electric motor. The reduced effective load leads to a reduction in energy consumption.

The typical strengths of electric axes come to the fore especially in the case of long paths and high cycle rates. Therefore, they are often a very efficient alternative for X and Y axes.

• The systems are configured for the requirements of the application in terms of optimum paths and dynamic response, and are adapted to the load.

• Their mechanical structure makes them easy to program: for example, only one axis needs to be activated for vertical movements.

• Their optimal mechanical adaptation makes them energy efficient, for example, by switching off the energy supply when at rest.

• Cartesian handling systems are space-optimized for the application.

And last, but not least: With Cartesian handling systems, the kinematics are defined by the application and its peripherals, not the other way around.