Linear Motion Systems: Only as Strong as Weakest Link 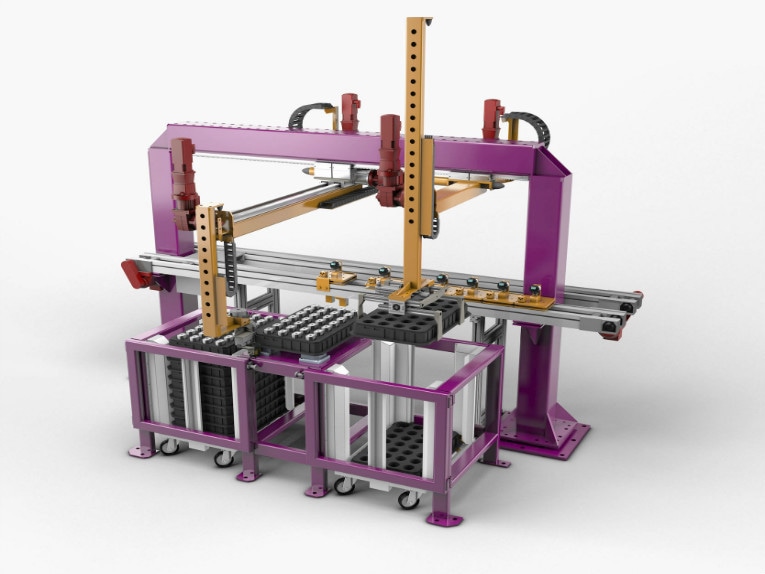 Review five links in the chain of design elements so critical to precision operation.

A linear motion system is only as strong as the most compromising links in its chain of mechanical and electromechanical elements. Understanding each component and feature (and its impact on design output) improves decisions and the odds the final design fully meets application demands. After all, system backlash, accuracy, and other performance aspects can be traced back to elements in the design and manufacture of the leadscrew, anti-backlash nut, couplings, motor, and control strategy.

Working with linear-motion suppliers having expertise in all a design’s links is the best way to get top design performance. Ultimately, optimized motion control systems are like a high-performance sports car will all its elements well balanced … for which the right size motor + the right transmission + the right tires + great control features (such as antilock brakes and traction control) = great performance.

Consider some examples of designs requiring top performance. In some types of 3D printing, layer resolutions are being pushed as low as 10 µm per layer. In medical devices, dispensing units must output lifesaving medications and control doses down to microliters. The same type of tight accuracies can be seen in optical and scanning equipment, chip and wafer processing equipment in the semiconductor industry, and the lab-automation space.

Only linear motion designs built with a holistic approach to component selection and integration can satisfy these ever-higher performance requirements. Often the most suitable solution for these builds is a motor-driven screw and nut with appropriate control architecture. So let’s consider key considerations and performance characteristics for each link in this type of linear assembly.

Link one: Quality of leadscrew and nut

Leadscrews have been around for decades in various forms with an array of nut designs and materials. For much of that time, the machines used to manufacture leadscrews were manually adjusted — limiting quality to the capability of the machine and the skill level of the operator. Most manufacturers today still use this type of equipment, but modern automated processes are taking leadscrew quality to the next level.

For example, such operations use a CNC-controlled infeed, skew adjustment, and pressure controls for roll-threading process to yield the most consistent leadscrew thread forms. The surface finish of these leadscrews is consistently smooth and free of surface abrasions that can tear at polymer nuts … for unprecedented system accuracy and life.

At the same time, advanced metrology and inspection techniques that trace the form and shape of leadscrew threads show results in point-to-point lead accuracies that are up to three times better than those of traditional manual methods. That consistently holds lead accuracies down to 0.003 in./ft over the length of a screw.

For transport-type applications moving some object point to point along an axis, the traditional method of checking lead accuracy every 300 mm or six inches is adequate. But for the highest precision applications, the accuracy of each shaft thread is relevant. Deviation from the suitable thread geometry is known as the drunkenness of the thread.

New automated CNC manufacturing equipment, processes, and detailed inspection methods produce tighter control and quality so that the high and low point within an individual thread show greatly improved sub-rotation accuracy — in other words, less drunkenness. This in turn helps leadscrews hold positioning repeatability over a single rotation to 1 µm. This is an especially critical performance metric in applications such as processing expensive wafers and chips for the semiconductor industry and accurately dispensing medications in a syringe pump.

After thread rolling, advanced screw suppliers straighten screw shafts with an automated to minimize errors and runout that can cause vibration, noise, and premature wear. Screw-shaft straightness is critical because any error is accentuated when it is assembled with the motor. In contrast, traditional (manual) methods of screw straightening can produce a snow-cone effect in the screw-shaft geometry — in the form of a single arch or multiple arches that corkscrew around the long shaft axis. Again, automated straightening and inspection eliminate these errors resulting in stable screw performance.

The final step in the production of leadscrews is application of a PTFE coating. Only a consistent smooth finish provides long life and system performance. Inconsistent application of the PTFE (resulting from a suboptimal coating environment or equipment) can spur pitting, fissures, bubbles, flaking, or surface roughness that cause premature wear in the nut and shortened assembly life.

Link two: Interaction of the nut and screw

Traditional anti-backlash nuts use a multi-piece design that requires a coil spring to move a collet linearly along the nut to close the fingers and control the fit between screw and nut.

Problems that contribute to failure in these designs are the sporadic and variable force of the spring, stick-slip of the collet on the nut, and fluctuating pressure as the nut material wears. In contrast, one alternative nut designed to deliver constant force includes a simplified two-piece design that applies pressure to the nut fingers in a radial fashion which is the direction needed to control clearance or play between the nut and screw.

Consider the conventional coil spring and collet design for an anti-backlash leadscrew nut. Here, a variable force coil spring generates axial force which is converted to radial force through mechanical interference. The design relies upon injection molded components to apply force equally to the fingers. Benchmark testing confirms that preload changes dramatically in the first 1,000 cycles.

One of the biggest advantages of constant-force anti-backlash leadscrew nuts is their capability to be tuned to an application with adjustments to the spring and other parameters. This tuning allows for the optimization of preload, backlash, drag force and running clearance to meet the specs required. Each screw and nut combination, along with each full up motor and screw assembly, can be tested for each of these performance characteristics during validation and final inspection.

The next link in the chain is how the screw attaches to the motor. There are three basic ways this can be accomplished.

The first is the most traditional method where a coupler is introduced into the assembly as the component between the screw and a motor built with an extending stud shaft This design requires more space for the length of the coupler and any associated attachment housing, and it also can create alignment issues. Due to the increased number of components, it is more difficult to keep everything on centerline. If one or more of the components are out of round or alignment, the result can be a cam type effect that greatly affects performance and the life of the system.

The second method inserts the screw into a tapered bore to mechanically secure it in place (from the back) with a bolt. Such assembly is common on motors that will require frequent maintenance — and a quick method for disassembly and reassembly. The drawback is that alignment is difficult to hold and can spur a snow-cone effect that amplifies inaccuracies over the length of the screw. In addition, this snow-cone wobble in the screw creates wear points that can spur the need for maintenance and premature system failure.

The third method is a direct fit of the screw to a hollow shaft within the motor and affixing the screw with a laser weld on the back of the motor. This method ensures the maximum engagement in the fit of the screw with the motor resulting in the highest accuracy alignment possible. In some cases, the weld may be replaced with an industrial adhesive that creates a permanent bond between the screw and motor. This assembly method also provides the highest level of accuracy by providing the least amount of runout in the screw resulting in extended life and minimizing the need for maintenance.

Optimizing leadscrew, nut, and coupling alignment extend the life of the entire system. As a baseline for comparison with other elements in the system, testing in a variety of orientations with various leads, and with a range of loads and speeds. The results have shown travel life exceeding the standard L10 bearing life by 40 times.

In other words, traditional motor-and-leadscrew setups include multiple components that require assembly and are difficult to align. They introduce play and tolerance stack-up that degrade accuracy and increase the potential for failure. High component count also makes for higher overall assembly cost. But integrated hybrid linear actuator setups include a leadscrew aligned and fixed directly with the motor — for fewer components. That makes for greater rigidity, accuracy, and reliability … as well as overall design value.

Linear actuators come with a choice of motor options with the most common motor choices being an open loop stepper, a closed loop version using either a board mounted control or an industrially encased smart stepper, and lastly a brushless dc (bldc) motor. Each has its own performance proposition or speeds and load capabilities, and each also comes with their own set of pros and cons around cost, integration, control, and more that we cover later.

The biggest impact on the linear motion performance of a motor requires a look under the hood at the internal design of the motor. Typical general-purpose motors use a wavy washer to hold bearings and the assembly in place. This is usually adequate for rotary applications and often can be applied to linear as well. However, wavy washers do provide for an amount of compliance within the motor that can spur small amounts of axial or linear play that translate into inaccuracies of linear position.

To alleviate this, one or both of two elements can be modified in the design. Larger bearings can be inserted to increase the thrust load capability of the assembly, and a spanner nut can be added and adjusted to a predetermined torque specification to take the play out of the system.

The final link that pulls all the elements together is how the physical linear motion is to be directed and controlled. Traditionally this would need multiple separate pieces including an amplifier and controller. Each would need a cabinet and the associated hardware, wiring, encoder, and sensors for feedback. These setups can become complicated and cumbersome to install, troubleshoot, and operate.

The emergence of off-the-shelf smart motor solutions has served to simplify the wiring and reduce the number of connectors and sensors associated with gaining step-servo type performance and control. This provides cost savings thanks to a lower component count as well as less time and labor associated with the install. These motors also come in preassembled industrialized packages that seal and protect the board and control from abuse or contamination with ratings to IP65 or IP67.

When an application requires specific customized features, has minimized space and size considerations, or low cost is a critical driver, a custom unencapsulated IP20 motor-mounted board control is a useful option. This is especially true for large-volume applications placed in stylized housings or equipment. Such actuators impart the advantages of smart motors (typically at substantial cost savings) and control is right at the motor for easier and faster communication with the master or PLC.