Rules for Actuator and Guide Alignment in Linear Motion Systems 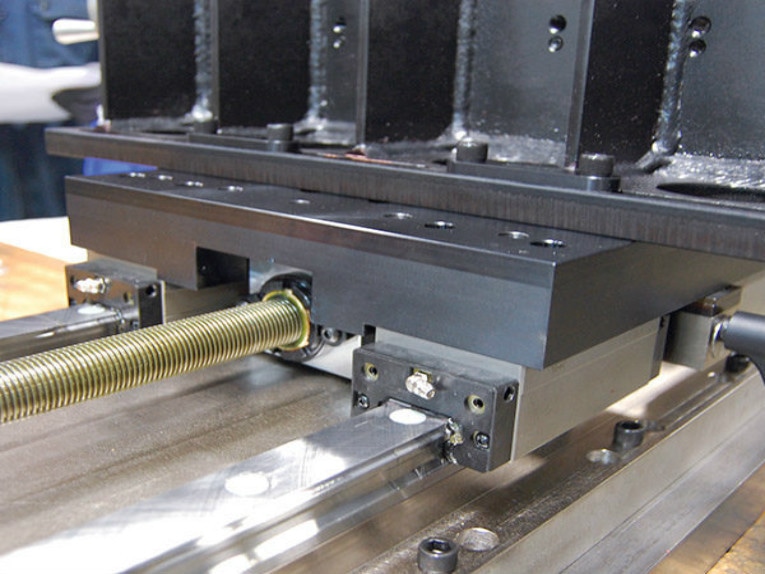 Many automated machines rely on linear guidance components, such as profiled rail, round rail or other rolling or sliding bearing structures, to guide and support the moving elements of equipment. Additionally, many times these moving elements are driven by some type of linear actuator device.

One of the most common issues in linear systems of any kind is misalignment. Misalignment can lead to a host of problems such as inconsistent linear motion results, shortened life of the linear bearing system, premature wear or failure of the actuator system, and erratic motion such as speed variation or wobbling.

However, there are some common ways to enhance overall system performance by optimizing the alignment of the linear guide and actuator.

While there are a number of ways to impart motion to a guided machine member, some of the most common fall into two categories. The first is rod-style actuators. Rod-style actuators can be either fluid powered, such as hydraulic or pneumatic, or electric such as a lead screws or ball screws.

The second is rodless actuators. These, too, can be either fluid powered or electric via a lead screw, ball screw, belt or linear motor. Both styles of actuators find application in guided systems. However, each has subtle differences in how it is best employed to maximize system performance and life.

The guide elements themselves, whether profiled rail, round rail or other rolling or sliding systems, must be properly sized and selected during the design phase and installed following the manufacturer’s recommendations, paying particular attention to the process of alignment. Doing so assures that the performance of the selected guidance system is maximized for the particular application.

Rod-style actuators, characterized by the piston rod or actuator rod extending and retracting with each cycle, typically offer a number of mounting options. Mounting options such as drilled and tapped holes in the device, mounting feet, spherical rod joints, alignment couplers, clevises or trunions are commonly offered by most suppliers of rod-style actuators. When employed with a guided mechanism, make sure that each subsystem, actuator and guide assembly is capable of unimpeded, smooth motion. Systems that attempt to rigidly couple the drive element to the driven element can exhibit inconsistent performance as these two elements try to move in separate planes with one or both of the subsystems loaded beyond its capability.

A rod-style actuator in such a system is best employed with some compliance member between the drive member (actuator) and the driven (guide system). For example, a spherical rod end mounted to the actuator rod allows the mounting point to swivel about the spherical joint. This type of connection at the guide is best used in conjunction with a trunion or clevis at the opposite end of the actuator where it attaches to the machinery frame element. Such a mounting scheme allows compliance in the connection without adding undue stress to either the drive (actuator) or the driven (guide system).

Rodless style actuators, characterized by their stroke being contained within their overall length, can also contain a guide system built into the actuator. Rodless actuators, when used in conjunction with a separate guide system, will also need to include a compliant member in the connection between the drive and driven members. Most actuator suppliers offer a variety of mounts intended for this type of installation, such as floating brackets.

Rodless actuators that include a guide system can perform the task of guiding and supporting the equipment while taking the place of a separate guide system. This feature can be particularly useful and many times saves the machinery builder time and money in the process. Rodless actuators with integral guides can be built into the machinery in combinations to meet a wide variety of motion needs. Multi-axis configurations such as x-y or x-y-z along with gantry configurations are all possible with proper sizing. In the installation of rodless actuators with integral guides, alignment is equally important.

Parallelism and perpendicularity of joined elements

A rodless actuator with an integral guide used in a single-axis configuration only needs to meet positioning expectations. The alignment process is straight forward as the actuator works singularly bringing its load into position without any external guidance. Examples of this type of setup include work-point-to-work-point or alignment-to-fixturing on the equipment.

Alignment of rodless actuators in multi-axis configurations becomes more challenging as multiple actuators need to work together. So when mounting these actuators, parallelism and perpendicularity of all joined devices must be considered for optimal performance and maximum service life.

There are three variables that can affect parallelism when mounting linear actuators. Asking and answering these questions will maximize parallelism and system performance.

1. Are the actuators mounted with the carriages at the same height? Misalignment in this plane will put an unfavorable Mx-axis bending moment on the bearing system of one or both units.

2. Are the actuators mounted at a consistent distance apart from each other from one end to the other? Misalignment in this plane will apply an unfavorable side load in the Fy-axis on the bearing system and if severe, may cause the units to bind.

3. Are the actuators mounted level to each other? Angular misalignment will apply an unfavorable bending moment in the My-axis on the bearing system of both units.

There are two variables that affect perpendicularity when mounting linear actuators.

1. In an X-Y-Z system, is the Z-axis mounted perpendicular to the Y-axis? Misalignment in this plane will apply an unfavorable bending moment on the Y-axis actuator’s bearing system in any or all possible axes.

2. In a gantry system where two actuators are required to move simultaneously in the X- or Y-axis, are they moving simultaneously? Misalignment or inadequate servo performance will apply an undesirable bending moment in the Mz-axis to the bearing system.

Actual tolerances related to alignment recommendations and mounting depend on the specific actuator manufacturer as well as the bearing type. However, a general rule of thumb is to consider the bearing system type. High performance bearing types such as profile rail systems tend to be quite rigid and alignment is more critical. Medium performance systems using rollers or wheels often have clearances that offer some forgiveness in alignment. Plain bearing or sliding systems often have greater clearance and may be even more forgiving.

When installing linear actuator mounting systems there are a number of measurement tools available to help assure proper alignment ranging from gauges to laser systems. Whatever tools are used, always create one axis as a reference for the X-Y and Z planes and mount the other devices with respect to the reference axis. Doing so will help to get the maximum performance and longest life from your actuator system.