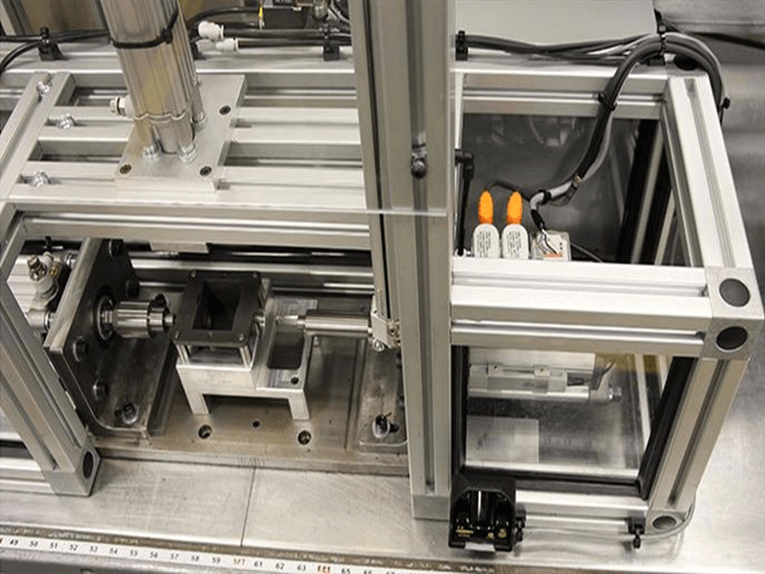 Researchers continue to look for ways to improve the accuracy of linear positioning systems, reduce or eliminate backlash, as well as make such devices easier to use. Here is a look at recent developments

Whether the needed linear movement is a little or a lot, positioning accuracy and reliability are some of the attributes necessary in linear systems. Two research centers that often develop products for use in space, Marshall Space Flight Center, Alabama and Lewis Research Center, Cleveland, have developed linear positioning devices that feature improvements in these attributes. One of these devices was initially developed for use in space, the other for more earth-bound applications. However, both have benefits to offer the power transmission industry.

The engineers at the Marshall Space Flight Center needed a linear actuator for space vehicles. The actuator will move the nozzle assembly of a space vehicle’s main engine. In combination with another actuator in the same horizontal plane but turned 90 degrees, the actuators will control pitch, roll, and yaw movements of the vehicle. Tolerances of these movements are ±0.050 in.

Functionally, the actuator must accurately provide incremental linear movements to these large objects, and hold position against heavy loads. The solution was an electromechanical linear actuator. It provides incremental movement to a maximum of 6 in. Its minimum stroke is less than 0.00050 in. It can hold loads to 45,000 lb.

Converting rotary to linear motion, this actuator is a clean, simple, device that can replace hydraulic actuators in applications that require such powerful yet controlled motion. This device also requires little maintenance time for cleaning and inspection, and it helps reduce the time needed to qualify the flight system.

This design uses a resolver and a relatively new feature, an anti-backlash gearing arrangement. The resolver measures incremental angular motion, which controls the incremental linear motion. Its accuracy is 6 arc/min. The relationship between rotation and translation is known from gear ratios and thread pitch.

The second feature is an anti-backlash gearing arrangement. It ensures that the gear teeth are in constant contact in clockwise and counter clockwise directions.

To achieve this contact, the shaft centers must be precisely aligned. During manufacturing, the shafts are machined on each assembly.

Actuator components
The electromechanical actuator consists of four assembly sections: 1) two 25- hp dc motors, 2) a gear train, 3) a linear piston, and 4) an accompanying housing. The dc motors rotate the gear train, transmitting rotational motion to a roller screw, which translates that motion to linear movement through the output piston. The motors provide a torque constant of 34.6 oz-in./A. The motors are run at 125 A. At the screw, the unit develops a torque of 31,000 oz-in., or approximately 162 lb-ft.

Two brushless dc motors are secured to a mounting plate. The mounting plate interfaces with the gearing system. A small adjuster plate permits on-assembly machining, which facilitates precise alignment of the shafts. This arrangement also helps eliminate backlash within the gear system.

The pinion gear is keyed on the motor shaft and supported by bearings inside the motor. The pinion mates with the idler shaft assembly, which includes two gears. The idler shaft reduces speed and transmits high torques to the output gear. As mentioned earlier, one of the idler gears is machined directly into the shaft.

The first idler gear consists of two pieces that enable small adjustments to remove rotational play in the system.

In assembly, the lower motor mounts to the motor-mounting plate, mating its pinion gear to the adjustable idler gears on the idler shafts. The upper motor is then mounted using the motor-adjuster plate. Next, engineers manually rotate the motor shafts, moving the idler gears with respect to their shafts to remove rotational play. The upper motor is then removed and a new adjuster plate machined to an exact center. This assembly process eliminates the backlash.

Bearings support each idler shaft at both ends. The output gear is keyed to a threaded roller screw shaft. The shaft and nut, and output piston assembly deliver linear movements. Misalignment is prevented with a linear bearing that stabilizes the output piston.

The spherical bearing assemblies, at the end of the rod and in the tailstock, include mounting attachments to connect to the engine and structural components.

A newer, flight version of this actuator uses four 15-hp motors. The smaller motors reduce the weight as well as motor inertia. The torque constant of these motors is 16.8 oz-in./A, running at 100 A and 270 V to provide the needed force to move a 45,000 lb load.

Another positioning design
Although this triple-ganged-lead screw positioner was not developed for use in space, it demonstrates improvements in accuracy and reliability. It reduces the time it takes to accurately position parts in machines, raise or lower platforms, precisely square packages, and ensure that platforms stay level for laser equipment and optical-pyrometry telescopes.

A typical screw positioning system might use a center-driven manual control, guided on three or four stationary rods, to move a plate. This design uses a triple lead-screw assembly as the main positioning mechanism. It drives a plate to or away from a fixed plate while keeping the plates parallel to each other.

The assembly consists of 27 shop-made parts, nine purchased parts, such as gears and bearings, and 65 assorted bolts, keyways, nuts, washers, etc. All components are assembled on the three-point control bracket and the one-point drive bracket. These assemblies mount in a precise drive-control position on the base end-plate of the cavity.

The positioner operates either by a manual hand crank on one of the drive pins or by a remote servo-motor-drive attachment. Travel position is read on a scale, on a pointer attachment, or with an LED readout. Position tuning can be controlled to 0.1 mm.