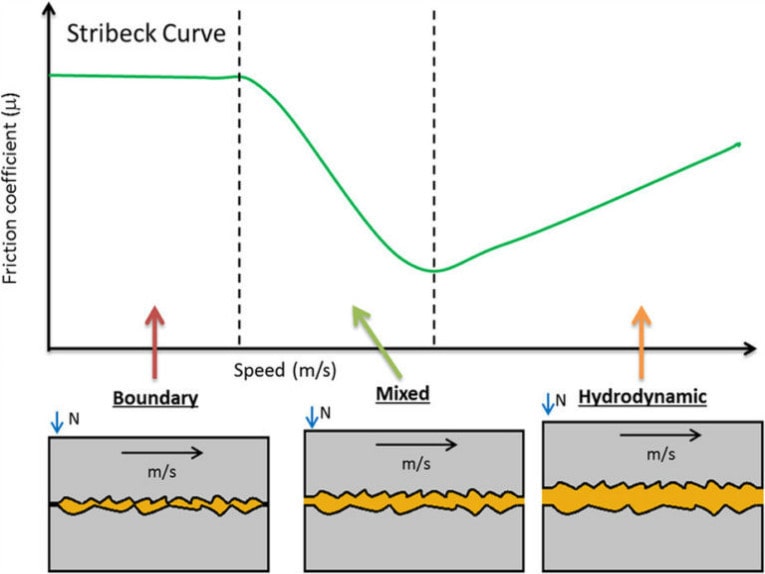 What causes stiction? How to reduce them.

Unless you’re playing the violin, stiction, or stick-slip, is an unwanted condition caused by the difference between static and dynamic friction between the two surfaces. When stiction occurs in linear guides, it can lead to chattering (“jerky” motion), seized motion, fluctuating torque requirements, or a loss of accuracy in the form of overshooting.

All surfaces have some amount of roughness. Even highly finished and polished surfaces are not perfectly smooth — they have peaks (referred to as “asperities”) and valleys that reduce the effective contact area of the surfaces. In other words, in some places, only the peaks of the two surfaces are in contact, while in other places, the peaks of one surface settle into the valleys of the other surface. And in some places, there is no contact between the surfaces.

Because the individual contact areas are very small, the pressure between the surfaces is extremely high (pressure = force ÷ area), and adhesion occurs at these points through a process known as cold welding.

Before the surfaces can move, the bonds that cause this adhesion must be broken. Similarly, where the surfaces interlock (the peaks of one surface settle into the valleys of the other surface), abrasion, or plastic deformation, must occur to break these interlocked areas and allow the surfaces to move.

Once the motive force is high enough to break these bonds between the surfaces — and overcome the static friction — motion begins. But even during motion, some abrasion still occurs because the surfaces are still not perfectly smooth. The resistance to motion due to the remaining surface roughness is referred to as dynamic, or kinetic, friction.

How to reduce stiction

But linear bearings travel a finite distance and then return in the opposite direction (as opposed to radial bearings, which can rotate in the same direction indefinitely), so they spend a good amount of time in what is known as mixed lubrication, where friction is determined by both the properties of the surfaces and the properties of the lubricant. Therefore, proper lubrication is the best way to control or reduce the effects of stiction in recirculating bearings (and in some plain bearings).

For plain bearings that ride on round shafts, one way to counter the effects of stick-slip is to choose shafts with the highest surface finish (lowest surface roughness) that is practical. And following the 2:1 ratio (also referred to as the 2:1 rule or the binding ratio) — which specifies that the moment arm distance should not be more than twice the bearing length — is very often necessary to prevent stick-slip in plain bearing applications.

Another option to minimize, or even prevent, stick-slip is to use air bearing guides. For air bearings, friction is solely a function of air shear from motion. Therefore, the difference between static and kinetic friction in an air bearing assembly is essentially zero, so the problem of stick-slip is virtually eliminated.