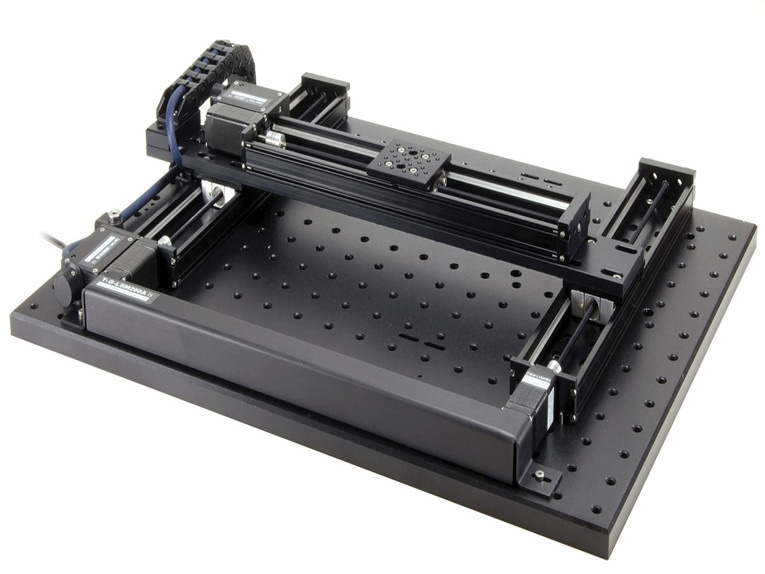 Careful analysis of the application, including orientation, moment and acceleration, will reveal the load that must be supported. Sometimes, the actual load will vary from the calculated load, so engineers must consider the intended use and potential misuse.

When sizing and selecting linear motion systems for assembly machines, engineers often overlook critical application requirements. This can lead to costly redesigns and rework. Worse yet, it can result in an overengineered system that is more costly and less effective than desired.

With so many technology options, it’s easy to become overwhelmed when designing one-, two- and three-axis linear motion systems. How much load will the system need to handle? How fast will it need to move? What is the most cost-effective design?

All these questions were considered when we developed “LOSTPED”-a simple acronym to help engineers gather information for specifying linear motion components or modules in any application. LOSTPED stands for load, orientation, speed, travel, precision, environment and duty cycle. Each letter represents one factor that must be considered when sizing and selecting a linear motion system.

Each factor must be considered individually and as a group to ensure optimal system performance. For example, the load imposes different demands on the bearings during acceleration and deceleration than during constant speeds. As linear motion technology evolves from individual components to complete systems, the interactions between components-such as linear bearing guides and a ballscrew drive-become more complex and designing the right system becomes more challenging. LOSTPED can help designers avoid mistakes by reminding them to consider these interrelated factors during system development and specification.

When calculating the load, it’s worth considering the type of tool that will be at the end of the arm to pick up or carry the load. Although not specifically related to load, mistakes here can be costly. For example, in a pick-and-place application, a highly sensitive workpiece could be damaged if the wrong gripper is used. Although it’s unlikely that engineers would forget to consider the general load requirements for a system, they may indeed overlook certain aspects of those requirements. LOSTPED is a way to ensure completeness.

* What is the source of the load and how is it oriented?

* Are there special handling considerations?

* How much weight or force must be managed?

* Is the force a downward force, a lift-off force or a side force?

The orientation, or relative position or direction in which force is applied, is also important, but it’s often overlooked. Some linear modules or actuators can handle higher downward or upward loading than side loading because of their linear guides. Other modules, using different linear guides, can handle the same loads in all directions. For example, a module equipped with dual ball-rail linear guides can handle axial loads better than modules with standard guides.

* How is the linear module or actuator oriented? Is it horizontal, vertical or upside down?

* Where is the load oriented relative to the linear module?

* Will the load cause a roll or pitch moment on the linear module?

Speed and acceleration also affect the selection of a linear motion system. An applied load creates far different forces on the system during acceleration and deceleration than it does at a constant speed. The type of move profile-trapezoidal or triangular-must also be considered, as the acceleration required to meet the desired speed or cycle time will be determined by the type of move required. A trapezoidal move profile means that the load accelerates quickly, moves at relatively constant speed for a period of time, and then slows down. A triangular move profile means the load accelerates and decelerates quickly, as in point-to-point pick-up and drop-off applications.

Speed and acceleration are critical factors in determining the appropriate linear drive-ballscrew, belt or linear motor.

* What speed or cycle time must be achieved?

* Is speed constant or variable?

* How will the load affect acceleration and deceleration?

* Is the move profile trapezoidal or triangular?

* Which linear drive will best address the speed and acceleration needs?

Travel refers to the distance or range of motion. Not only must the travel distance be considered, but also overtravel. Allowing some amount of “safety travel,” or additional space, at the end of the stroke ensures the safety of the system in case of an emergency stop.

* What is the distance or range of motion?

* How much overtravel may be required in an emergency stop?

Precision is a broad term that is often used to define either travel accuracy (how the system behaves while moving from point A to point B), or positioning accuracy (how closely the system reaches the target position). It can also refer to repeatability, or how well the system moves back to the same position at the end of each stroke.

Understanding the difference between these three terms-travel accuracy, positioning accuracy and repeatability-is critical to ensuring the system meets performance specifications and that it is not overengineered to achieve a degree of accuracy that may be unnecessary. The main reason to think through the precision requirements is drive-mechanism selection. Linear motion systems can be driven by a belt, ballscrew or linear motor. Each type offers trade-offs between precision, speed and load capacity. The best choice will be dictated by the application.

* How important are travel accuracy, positioning accuracy and repeatability in the application?

* Is precision more important than speed or other LOSTPED factors?

Environment refers to the conditions in which the system will operate. Extreme temperatures can affect the performance of plastic components and lubrication within the system. Dirt, liquids and other contaminants can damage the bearing raceways and load-carrying elements. The service environment can greatly influence the life of a linear motion system. Options such as sealing strips and special coatings can prevent damage from these environmental factors.

Conversely, engineers need to think about how the linear motion system will affect the environment. Rubber and plastic can shed particulates. Lubricants can become aerosolized. Moving parts can generate static electricity. Can your product accept such contaminants? Options such as special lubrication and positive air pressure can make the module or actuator suitable for use in a clean room.

* What hazards or contaminants are present-extreme temperatures, dirt, dust or liquids?

* Is the linear motion system itself a potential source of contaminants for the environment?

Duty cycle is the amount of time to complete one cycle of operation. In all linear actuators, the internal components will generally determine the life of the overall system. Bearing life inside a module, for example, is directly affected by the applied load, but is also affected by the duty cycle that the bearing will experience. A linear motion system may be capable of meeting the previous six factors, but if it runs continuously 24 hours a day, 7 days a week, it will reach the end of its life much sooner than if it runs only 8 hours a day, 5 days a week. In addition, the amount of in-use time vs. rest time influences heat buildup inside the linear motion system and directly affects system life and cost of ownership. Clarifying these issues in advance can save time and aggravation later.

* How often is the system in use, including any dwell time between strokes or moves?

* How long does the system need to last?