What are Accuracy and Repeatability in Industrial Robots? 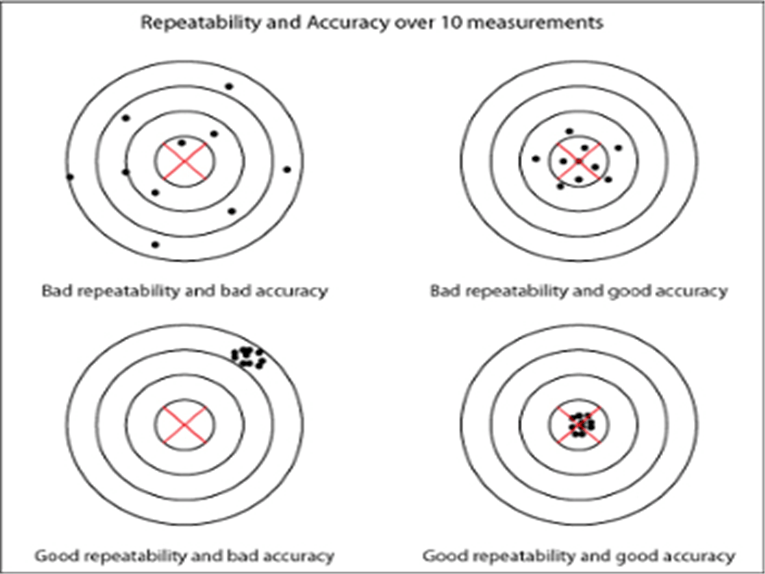 There are numerous ways to classify the performance of linear positioning devices such as ball screws, belts, and rack and pinion systems, but the terminology can be confusing. The two most common terms, accuracy and repeatability, and are often used interchangeably. When someone says that a ball screw is very accurate, they may really mean that it’s repeatable. In fact, accuracy and repeatability are unrelated. A system can be very accurate but not very repeatable, or vice-versa. Here’s the difference…

The formal definition of accuracy is “the degree to which a measurement, calculation, or specification conforms to the correct or known value or standard.” In relation to a linear drive system, this can be taken to mean the degree to which the final position matches the commanded position. So, if we command a rack and pinion system to travel 535 mm, its accuracy is determined by how closely it achieves 535 mm of motion. But how accurate is it? That depends on the amount of error you’re able to accept. If the application will allow a result of 535 mm ±2 mm, then as long as the ball screw achieves a position between 533 and 537 mm, it can be considered accurate.

Accuracy is most influenced by mechanical factors such as backlash, “windup” (lack of torsional stiffness), and flexing of components. On the electrical side, the bandwidth of the control system and the resolution of the measuring system (encoder or resolver) can also affect the accuracy of the drive’s movement, since these components are responsible for commanding, reading, and correcting the actual position of the system.

Repeatability is a drive mechanism’s ability to return to the same position multiple times under identical conditions. Repeatability can be defined as uni-directional, in which the point is always approached from the same direction, or bi-directional, in which the point can be approached from either direction. Unlike accuracy, which is somewhat subjective depending on the application requirements, repeatability is an absolute value. For example, a ball screw can be described as being repeatable to ± 10 microns. Just as a system can be accurate but not repeatable, it can also be repeatable but not accurate. For example, if the specified movement is 535 mm ± 2mm, and the system consistently moves to 537.5 mm over several attempts, it is repeatable, but not accurate.

The factors that most influence repeatability are within the mechanics of the drive system: backlash in a rack and pinion system or lead deviation of ball screw threads. Repeatability can also be affected by changes in the system, such as expansion or contraction of components due to temperature fluctuations. While accuracy can be compensated for by programming within the drive amplifier and control, repeatability generally cannot be.