How to Choose Linear Guide Accuracy 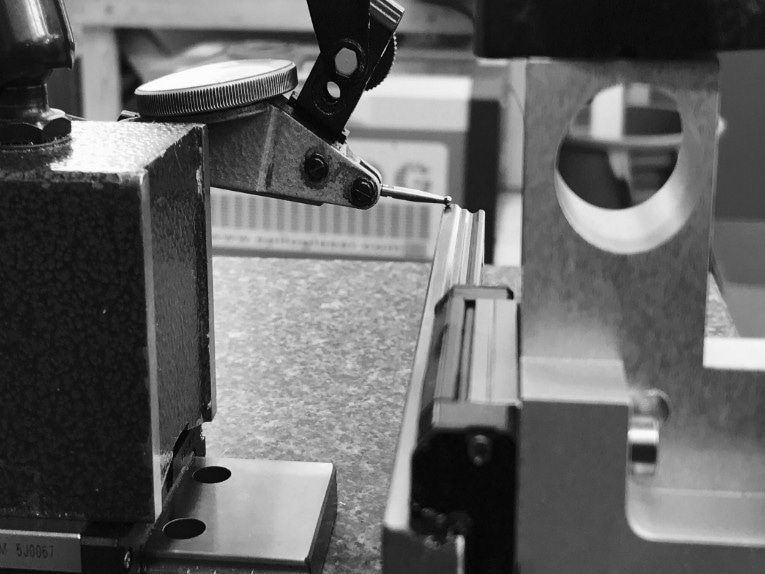 When choosing a recirculating linear guide, there are several criteria that need to be specified, including size, preload and accuracy. And although the term “accuracy” is often used in a generic sense, when referring to recirculating ball or roller guides, it designates five characteristics:

1. Height tolerance of the rail and block assembly

2. Permissible difference in height between multiple blocks on the same rail

3. Width tolerance of the rail and block assembly

4. Permissible difference in width between multiple blocks on same rail

5. Parallelism between reference edges of the rail and the block

The choice of linear guide accuracy class depends on the mounting arrangement of the guide rails and bearings and on the required travel accuracy.

Single block on a single rail

For an assembly consisting of a single guide rail and one bearing block, the height (1) and width (2) tolerances of the assembly are important not only for mounting the rail to its base, but also for mounting an external load or tooling to the bearing block. In this configuration, the positioning requirements of the application are the primary factor in choosing the accuracy class. For example, applications that use rigid tooling or that need to maintain a tight tolerance for the position of the payload should use higher accuracy bearing blocks and guide rails.

Multiple blocks on a single rail

When more than one bearing block is mounted on a guide rail, any deviations in height (2) or width (4) can be problematic. This is especially true when mounting the payload or tooling to the bearings. Differences in height can cause uneven loading on the linear guide assembly, which leads to premature failure of the more heavily loaded bearing. When loads are rigidly pinned or fixed to more than one bearing block on a single guide rail, a higher accuracy class is often needed to avoid uneven loading on the bearings.

Probably the most commonly used configuration for recirculating guides is the combination of two guide rails in parallel with two bearing blocks per rail, because it resolves moments on the bearings into vertical and horizontal forces. However, this arrangement means that six elements (two guide rails and four bearing blocks) must be aligned. In this situation, specifications 1, 2, 3, and 4 all play a part in the resulting loads on the assembly. Does that mean you need “super” precision bearing blocks and guide rails when this configuration is chosen? Not necessarily, but a linear guide accuracy class of “high” or above is generally recommended.

Linear guide accuracy class also plays an important part in the bearing’s travel behavior, which is the performance characteristic that most people associate with the term “accuracy.”

Regardless of size, preload, or mounting configuration, specification 5—parallelism between the reference edges of the rail and the block—plays a large part in determining the travel accuracy of the guide system. This parallelism tolerance specifies how the bearing block will behave positionally as it moves down the rail. In other words, does the bearing block seem to deviate side-to-side or up-and-down as it travels?

Using a glue dispensing machine as an example, a lower accuracy rail and block combination (meaning a relative lack of parallelism between the reference edges of the rail and the block) will result in a varying glue thickness, due to the side-to-side movement of the bearing causing the distance between the dispensing head and the work piece to fluctuate. And if the glue follows a horizontal path, up-and-down movements of the bearing block will prevent the glue from being dispensed in a nice, straight line.