The Difference between Cartesian, Six-Axis and SCARA Robots 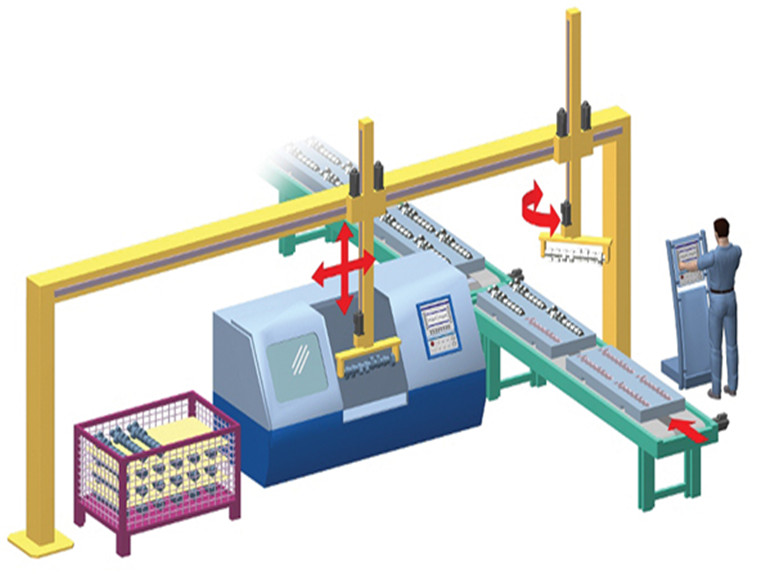 A robot’s load capacity (defined by the manufacturer) must exceed the total weight of the payload, including any tooling, at the end of the robot arm. What limits SCARA and six-axis robots is that they support loads on extended arms. Consider a machining center that makes bearing assemblies of 100 kg or more. That payload exceeds the capabilities of all but the largest SCARA or six-axis robots. In contrast, a typical Cartesian robot can pick and place such loads with ease, because its support frame and bearings consistently support the entire range of motion.
Even when a heavy load is within a robot’s capacity, it can degrade accuracy. For example, picking and placing 50-kg items is within the payload range of both SCARA and Cartesian robots. But 50 kg is at the upper end of a typical SCARA’s capabilities, so it will take more costly controls and components to handle the torque. What’s more, typical SCARA robots can place heavy payloads to within 0.1 mm, as the weight deflects the arm and degrades the robot’s ability to consistently position the load with accuracy. But Cartesian robots with ball-screw actuators and well-spaced support bearings can repeatedly place 50 kg and heavier loads to within 10 µm.

It depends on how the robot is mounted and how it situates parts or products being moved. The goal is to match the robot’s footprint to the work area. If a SCARA or six-axis robot’s floor or line-mounted pedestal creates an obstruction, then such robots may not be the best option. If the application only needs movement in a few axes, then small-frame Cartesian robots can mount overhead and out of the way. But for intricate part handling or work needing four or more axes of motion, a Cartesian robot’s framework can pose too many obstructions, and a small SCARA robot, sometimes requiring just 200 mm2 of space and four bolts on a pedestal, may be more suitable.
nother factor is part orientation. SCARA and six-axis robots can rotate parts, an advantage for handling parts or tools at various angles and positions. To get similar flexibility, some Cartesian robots have subcomponents called feed modules that move light payloads in the Z axis. Typically, feed modules use a ball-screw thrust rod to move parts or tools along the Z axis in handling, pick-and-place, and feed applications. Cartesian robots can also incorporate rotary actuators to provide additional orientating capabilities.

Along with load ratings, robot-manufacturer catalogs also list speed ratings. One key consideration when choosing robots for pick-and-place applications is acceleration times over significant distances. Cartesian robots can accelerate at 5 m/sec or more, rivaling the performance of SCARA and six-axis robots.
Cartesian robots also make sense when applications involve long spans. That’s because designers can quickly modify and extend Cartesian robots as needed with modules to 20-m long. Speed and distance are further customizable by choice of belt, linear motor, or ball-screw actuator. In contrast, articulating arms are typically predesigned for a given reach, such as 500 mm, for example.

SCARA and six-axis robots have predefined accuracy ratings that make it easy to determine their repeatability of movement. But these robots lock designers into one level of accuracy at the time of purchase. End users can upgrade Cartesian or gantry robots to myriad levels of accuracy by changing the actuator, even to 10 µm, with a ball screw. For less accuracy and to cut cost, end users can swap in a pneumatic or belt drive and a different actuator for 0.1-mm accuracy.
Precision is key in high-end applications such as machine tooling. Those Cartesian robots need better mechanical components such as precision-machined ball-rail tables and ball-screw actuators. For applications where SCARA and six-axis robot arms can’t maintain accuracy due to arm deflection, consider a Cartesian robot with high-precision linear bearings. The bearing spacing minimizes deflection so the end effector can be positioned more accurately.
Although small work envelopes favor SCARA or six-axis robots, sometimes these robots’ complexity and higher cost are unnecessary. One example where Cartesian robots work better is in a high-volume medical-pipette manufacturing application. Here, a robot takes pipettes from a mold and inserts them into a rack transported by a secondary automation machine. SCARA and six-axis robots are viable because 0.1-mm accuracy is sufficient in this application. But deflection is problematic when the robot handles smaller 3-mm pipettes. Plus, lack of room for a pedestal inside the cell favor gantry robots.

Two factors that dictate the best robot are the working envelope’s ambient environment and hazards in the space itself. A third consideration, whether a robot will go in a clean room, is generally not an issue because all robot types are manufactured in clean-room versions.
The pedestals of SCARA and six-axis robots tend to be compact, which is handy with limited floor space. But this may be irrelevant if installers can mount the robot’s support frame overhead or on a wall. In contrast, for applications with mechanical interference, as when a robot must reach into boxes to pull out parts, six-axis arms are usually most suitable. Six-axis robots typically cost more than Cartesians, but the expense is justified if there’s no way to execute the application without complex motion sequences.
Environmental factors such as dust and dirt also affect robot selection. Bellows can cover SCARA and six-axis robot joints, and different types of seals protect Z-axis actuators. For clean rooms using air purges, Cartesian robots let designers enclose the linear actuators in an IP65 structure that minimizes entry of water and dust. Plus, high-performance seals can enclose many of the axes’ structural components.

This is the amount of time it takes to complete one cycle of operation. Robots that run continuously 24/7 (as in high-throughput screening and pharmaceutical manufacturing) reach end of life sooner than those running only 8-hr days, five days a week. Clarify these issues in advance, and get robots with long lubrication intervals and low maintenance requirements to prevent aggravation later.