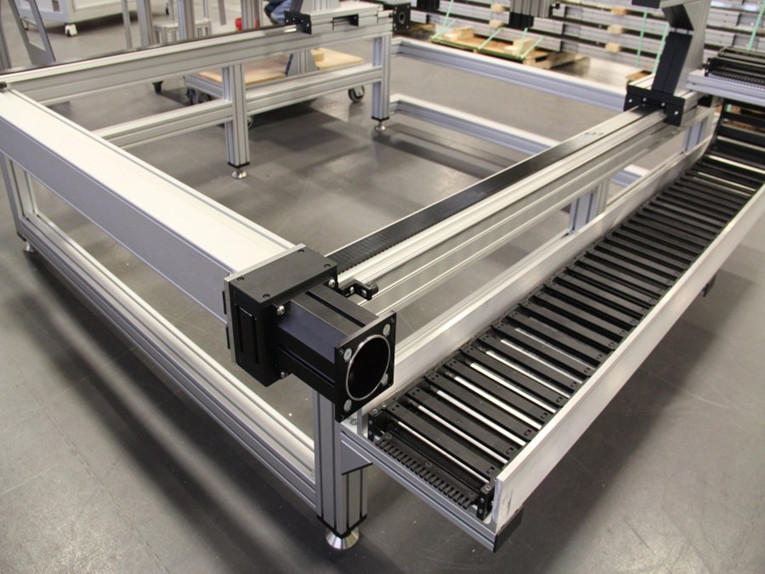 Reinforced urethane timing belts work well in high-accuracy linear motion and conveying applications because they stretch very little, do not creep or slip, and are much stiffer than neoprene, which means less tooth deflection. In linear positioning roles, however, belts are subject to distinctly different load patterns than in traditional power transmission and rotary motion applications. To accurately assess the dynamics that affect performance in these applications, certain factors must be analyzed that previously were of no concern.

This four-part series begins with belt drive geometry, which applies to any application. Later installments will delve into the various forces and deflections acting within the system, as well as linear position errors under load.

Belt pitch p is the distance between centerlines of adjacent teeth. Pitch is measured along the belt pitch line, which corresponds to both the center of the reinforcing cords’ placement and the neutral bending axis of the belt. (The neutral axis is the neutral plane edge-on. Under bending, axial strands along the neutral plane remain free of stress, while strands on one side compress and those on the other stretch.)

Pulley pitch (or sprocket pitch) is, similarly, the arc length between the centerlines of the pulley grooves, measured along the pulley’s pitch circle. The pitch circle coincides with the pitch line of a meshing belt, thus the pitch diameter d of a synchronous belt pulley is larger than the actual outside pulley diameter do; this outside diameter is a concern with particular types of belting, as we shall see relevant geometric parameters on simdifferent belt-and-pulley mesh configurations.

Pitch diameter relates to belt pitch and the number of pulley teeth zp by the formula.

Outside pulley diameter relates to pitch differential, belt pitch, and number of pulley teeth as follows.

Metric AT series belts, on the other hand, are intended to contact the bottom lands of the pulley grooves with the belt teeth. As a result, errors in the pulley root diameter dr will cause a mismatch between belt pitch and pulley pitch. The root diameter of a pulley is given by.

where ur is the radial distance between the pulley’s pitch diameter and root diameter. The parameter ur has standard values for given AT series belt sections.

A length of belt must accommodate the size of the pulleys and their distance from one another, fitting snugly over them. But also, with toothed belts, an integer number of teeth of the right pitch must be possible with a given pulley configuration. (For simplicity, this “Course audit” series will continually use a two-pulley arrangement to illustrate concepts that can be readily applied to more elaborate systems.)

Belt length L is measured along the pitch line and is calculated as.

where zb is the number of belt teeth. Most linear actuators and conveyors contain two pulleys of equal diameter. In such cases, belt length relates to center distance C and pitch diameter d by the equation.

When two pulleys do not have equal diameters, you first need the angle of wrap around each pulley. The small pulley’s angle of wrap θ1 is calculated as.

where d1 and d2 are (respectively) the small and large pulley diameters. The angle of wrap θ2 around the large pulley is given as.

Span length LS refers to a section of belt that does not contact the pulley — there is a span length at both slack and taut sides.

The overall belt length for pulleys of unequal diameter can now be written.

Note that the small pulley’s angle of wrap θ1 is a function of the center distance C, as is the overall belt length. Therefore, our most recent equation is not closed-form. Center distance, however, can be calculated through numerical methods; a handful of iterations may suffice. Or, an approximate value can be obtained analytically.