How to Shrink the Size of a Linear Actuator 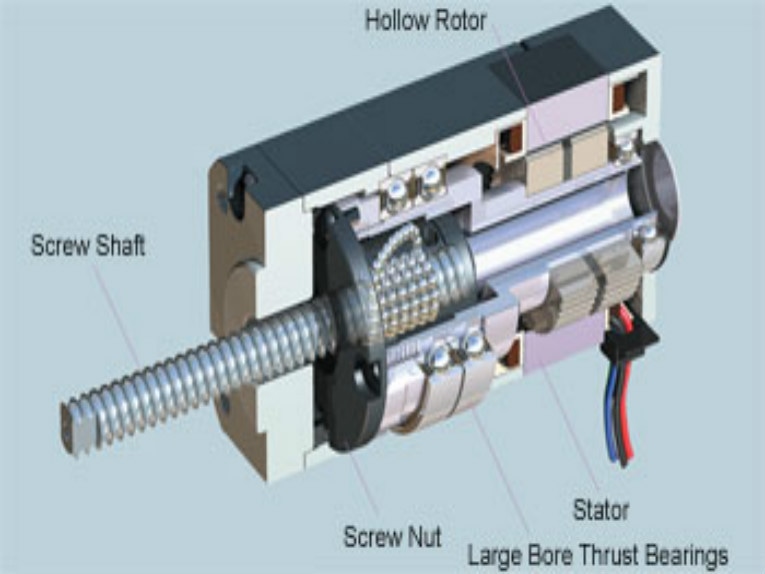 Solution for X-Y stages and small machining centers, such as 3D printers.

Linear actuators come in a wide range of sizes, but over the past several yeas, manufacturers have been emphasizing more and more compact footprints. But no matter how small the actuator, the addition of a motor can make the overall size of the complete system too large for space-constrained applications. Some manufacturers are addressing this issue by integrating a motor and a lead screw (or ball screw) into one assembly, in what are commonly referred to as hybrid actuators.

The most common variation of the hybrid design is a stepper motor with an integrated lead screw, since the two components have similar specifications for load, speed, and thrust force. And this is arguably where the integrated layout provides the greatest benefit, since the loads and forces required in lead screw applications are typically smaller and better suited for a design without external guidance (i.e. no linear shafts or rails to support the load). However, guides can be integrated into hybrid actuators, giving them greater versatility for use in applications such as precision positioning systems, where a load needs to be supported as it’s moved.

The driven screw configuration is most similar to a traditional screw assembly in terms of end fixity, where one end of the screw is supported by one or two axial bearings and coupled to the motor, while the opposite end is either “free” (not supported) or supported by one or two axial bearings. The difference in a driven screw hybrid actuator is that the driven end of the screw is mounted directly into the rotor of the motor and is supported by bearings inside the rotor. No external bearings or screw-to-motor coupling are needed. Like a traditional screw assembly, the nut is mounted external to the motor, and the rotation of the screw moves the nut along the screw shaft.

In the driven nut configuration, movement can occur in one of two ways: the nut/motor combination can be constrained so that the screw shaft travels back-and-forth as the motor rotates the nut; or the screw shaft can be constrained so that the motor/nut assembly moves along the stationary screw. When the screw shaft is constrained and not allowed to rotate, higher speeds can typically be achieved, since “whipping” (the jump-rope type effect that occurs when a screw is turned very rapidly) is avoided. An axial bearing is typically mounted on the outer circumference of the screw nut (inside the motor rotor) in order to take up thrust forces.

Along with the benefit of compact size, having fewer mechanical connections can reduce overall system compliance, when compared to similar systems that incorporate a motor externally coupled to a screw. In systems without linear guides, the main areas of application for hybrid actuators involve pushing or pulling relatively light loads, or precise positioning, such as in focusing and scanning applications.