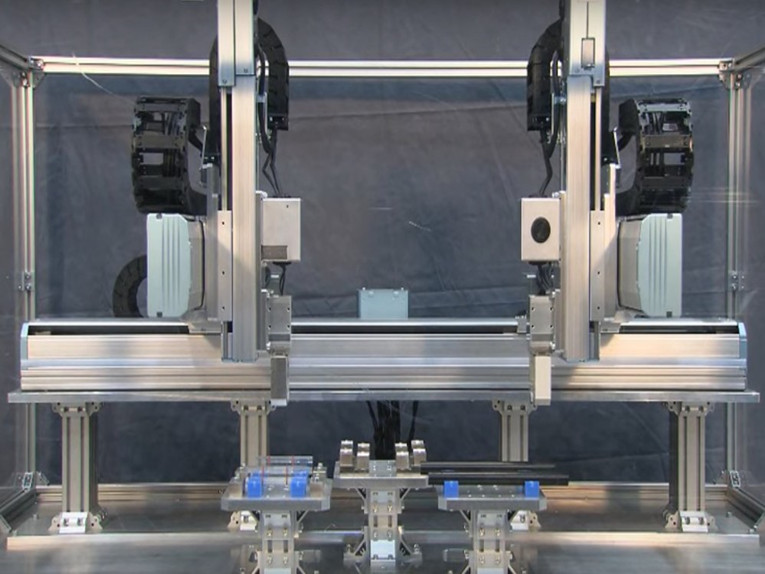 Available in a range of performance capabilities and prices, robots are becoming ubiquitous in all types of industrial production operations. Understanding the capabilities of each robot type is key to making the best choice for your business.

For a half-century, the image of the large, six-axis articulated robot welding car and truck bodies has become fixed in the popular imagination. Robots are used in sectors as diverse as healthcare, food and beverage, steelmaking, and warehousing—wherever there are repetitive or environmentally or ergonomically challenging tasks that can be accomplished faster, more reliably ,and/or more cost-effectively. Today, robots are even assembling new robots.

Robots come with one to seven axes, each axis providing a degree of freedom. A two-axis cartesian gantry typically plots on the X-Y or Y-Z axes. A three-axis robot has three degrees of freedom and performs its functions through the X-Y-Z axes. These small robots are rigid in form, and cannot tilt or rotate themselves, although they can have attached tooling that can swivel or rotate or adapt to the shape of a small payload. Four- and five-axis robots have additional flexibility to rotate and tilt. A six-axis articulated robot has six degrees of freedom—the flexibility to move objects in any direction or rotate them in any orientation. These six-axis robots are generally chosen when an application requires complex manipulation of a large or heavy object. Seven-axis robots are capable of additional orientations to maneuver tooling in tight spaces. They can operate closer to the work piece than other articulated robots for potential space savings.

Articulated robots
The popularity of six- and seven-axis articulated robots reflects the great flexibility that six degrees of freedom permit. They are easy to program, come with their own controller, and movement sequences and I/O activation can be programmed via a user-friendly teach pendant. They can have substantial reach, over three meters with certain models. This range of sizes makes articulated robots suitable for a great number of industries and applications involving making or moving of materials or finished goods.

By design, the articulated robot occupies space and footprint that can’t be utilized for other purposes. It also has singularities, i.e., locations and orientations in the surrounding space it cannot access. These spatial limitations require more complex safety precautions since the robot will often be used in zones where workers are present.

Cartesian robots
A cartesian, or linear robot, is typically a lower-cost robot consisting of an assembly of linear actuators and/or rotary actuator at the end of the arm for 3D applications. These robots are very adaptable and east to install and maintain. The strokes and sizes of each axis can be customized to the application. Its reach and payload are independent of each other, not intertwined. The linear axis comes in a number of designs which further adapt it to the function it performs.

The cartesian robot’s main limitation is comparative inflexibility. It can easily accommodate linear movement in three axes, and rotation around a fourth axis. However, one has to add a motion controller to perform rotation around more than one axis. Cartesian robots are rarely used in washdown situations as they don’t provide sufficient protection against water ingress. Also, precision and thoroughness at installation is required—each axis must be carefully aligned, and surface flatness must be adequate, especially in larger systems.

SCARA robots
SCARA robots are designed for light duty applications. They are a streamlined version of articulated robots, and their simplicity and small size make them easy to integrate onto assembly lines. SCARA robots can achieve quite impressive cycle times, with high accuracy. They are very adept at functions like inserting components in spaces with tight tolerances while maintaining their rigidity in such movements, which makes them a cost-effective choice for many pick-and-place applications as well as small parts handling.

Delta robots
The delta robot is renowned for its speed, with pick rates up to 300/min. Its mounting type places it above the working zone, limiting the loss of footprint. It is often paired with a vision system to pick pieces randomly placed in complex sorting and packing applications. Like the articulated and SCARA robots, it will generally be provided with a teach pendant for easy programming. Delta robots are often used in food production applications but, like cartesian robots, they may require additional shielding or separation from the ambient environment.

Collaborative robots
Collaborative robots, or cobots, are a relatively recent development with a promising future in making safe human-machine interaction possible. By allowing a direct collaboration between a worker and robot, they are adding a dimension to our understanding of how automation can be integrated into industry. A cobot can be an articulated, cartesian, SCARA, or delta robot. Although, to date, most would be categorized as articulated. They come with payload capacity of 4-35 kg, scaling up in size and reach (also price) accordingly. There are models with up to seven axes; the latter can perform tasks that are particularly challengingly ergonomically. Cobots are even being used as independent production line robots.

Making your choice
When approaching an investment in robotics, one should consider all aspects of an application prior to making a final selection. Here are some of the more important factors to consider:

They should be the first criteria considered in your robot selection process, as these factors may immediately shorten the list of suitable options. For example, a large, heavy load would rule out any consideration of lightweight handling technologies. On the other hand, if the reach is long but the payload weight is low, a lower cost cartesian robot might suffice.

In an application that requires five or six degrees of freedom, an articulated robot may be the only viable solution. If it is, one option for the price-sensitive business requiring one or two robots might be repurposed (used) units. However, for simpler applications, like small parts positioning and loading, electronic parts insertion, and box and machine tool loading—any application where two or three axes are sufficient—why pay for more axes than the application calls for?

Does the application require a high pick rate, like that of a delta robot, or would a lesser pick rate of cartesian gantry or SCARA robot suffice?

More and more, machine and production line footprints are key planning concerns. Floor space is expensive, and companies want to optimize their shop floor layout. Cartesian and delta robots provide a clear advantage over the other technologies, since only vertical space is lost, which is generally less critical.

Design, assembly, installation, and commissioning time and expense should be factored into comparative costing, especially incorporating a robot into a larger machine or system. Delays in receiving and assembling the robot could hold up the entire project.

Unscheduled downtime is every production manager’s nightmare. Robots should be relatively easy to maintain and repair.

Within a company or industry could be a valid consideration on business grounds, even if the robot selected is not the most ideally adapted or even the cheapest but capable of doing the job. Sometimes, the well-traveled path will prove to be the one of least resistance (and risk).

The proliferation of robot technologies has enabled businesses of all sizes to access the benefits of automation. The best robot for you is usually the one that best fits your application—not just for achieving the productivity gains from the investment and satisfying the technical requirements of the application, but also from the standpoint of related issues like plant safety, space utilization and, of course, the going-in cost and after-sales support.